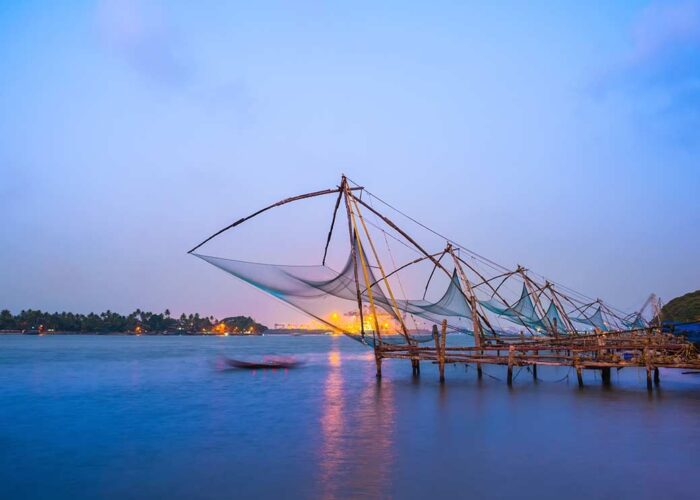 Are you going to travel to India and plan to discover the city of Cochin? In this guide we explain what to see and what to do in Cochin so that you don’t miss out on the most important temples and monuments in the city, as well as the essential activities.

Cochin, also called Kochi or Queen of the Arabian Sea, is in Kerala. Kerala is a state in southern India considered as one of the top 50 destinations in the world by National Geographic.

In the 16th century, Cochin was a nerve center for the trade of spices. It was also the old tributary capital of the country. It is currently a commercially notable port city that has managed to preserve the essence of its rich cultural past.

Would you like to have a more general vision of India? Take a look at our article What to see and do in India, where we review the most outstanding cities and the experiences that we most recommend.

How to get to Kochin

The city of Cochin has an airport, a train station and a bus station. One of the most popular ways to get to the city is by train, whose station is Ernakulam Junction.

In Ernakulam there are two train stations, if you want to go to Fort Kochi you must get off at “Junction” which is near the port. The other station, called “Ernakulam Town” will leave you much further.

How to get from Ernakulam Junction railway station to Fort Kochi ?

Once you arrive at Ernakulam Junction, you should approach the “Boat Jetty” port from where the state ferries leave for Fort Kochi.

You could walk, which is about 2.5km, but it will take you about half an hour and it’s very hot. So I recommend you take a tuk tuk.

Once you are at the Ernakulam Boat Jetty port, you should take the ferry which costs about Rs 2.5 each way and takes you to Fort Kochi in about 15 minutes.

From where the ferry leaves you, you can walk to your hotel -if it is in the historic center of Fort Kochi or Mattancherry- or you can take a tuk-tuk.

What to see in Kochin

The Dutch Palace of Mattancheery was built by the Portuguese in 1557. It is a palace that also passed through Dutch hands until finally a Rajah made it his residence.

On its walls there are murals and paintings of great relevance, which show mythological scenes. Its murals are considered one of the best examples of Hindu art. A visit to these paintings cannot be missing from your list of things to see in Cochin.

The palace is quadrangular in shape and is built in the Nālukettu style, a traditional style in the Kerala area. In it you can also see the influence of the Europeans.

In the immediate vicinity of the palace there are small temples dedicated to the Hindu gods Krishna and Shiva.

It is located in the old part of Cochin, which is also called the Jewish quarter. In this area there are up to 7 synagogues, but the Paradesi Synagogue is the oldest.

Judaism is a minority religion in India but it has always been present. The Jews were persecuted by the Portuguese in 1567 and asked the Rajah for help. He gave them some land near the Royal Palace and it is where the synagogue was built.

The Paradesi Synagogue was destroyed in 1662 and rebuilt two years later by the Dutch. If you want to visit it, keep in mind that it is located right next to one of the most emblematic places in the city, the Dutch palace of Mattancheery.

Practical data
Location: Synagogue Ln, Jew Town
Hours: 10am to 12pm and 3pm to 5pm, except Saturdays and other Jewish holidays

The church of San Francisco was built in the 16th century. It is a Christian church considered to be the oldest European-style church in India.

A former Portuguese colonizer, Vasco de Gama, was buried here. Later, after fourteen years, his remains were transferred to Lisbon.

The church of San Francisco stands out for its architecture of simple lines.

The Fort of Cochin is an area surrounded by the sea and with views of the typical fishing nets of the city.

It is an area with a lot of atmospheres, ideal for discovering the promenade on foot. In the Cochin Fort you will find the best option if you are interested in shopping or enjoying the best gastronomy in the city, since there is a wide range of food outlets.

Chinese traders, present in Cochin since the 8th century, brought fishing nets to the city. If you are wondering what to see in Cochin, to discover one of the most typical images of the place you cannot miss a visit to the fishing nets.

The structure of the nets is made of wood and has a single point of support on the ground. The frame and the net are suspended in the water, drawing an aesthetic silhouette in the air.

To fish, the nets are lowered for about 15 minutes and then raised. This is how the fish closest to the shore are caught.

As we told you before, a good option to contemplate the fishing nets is to do it from the Fort of Cochin.

Hill Palace is an archaeological museum, considered the largest in the Kerala area, in southern India. It was built in 1865.

If you like to discover the past of the places you travel to, we recommend a visit to this museum, where you will discover more than 200 artifacts and heritage objects, such as the Cochin crown.

This museum is not just any place, as it is made up of 49 traditional-style buildings. Formerly it was the residence of the Maharaja.

Things to do in Kochin

Kathakali shows are dramatic performances accompanied by dance. It is a classic show, in which costumes are used. Makeup is also very important.

You can see a Kathakali show in the theater located in the Cochin Fort, one of the most lively areas of the city.

2-The Backwaters of Kerala

If you would like to know what to do in Cochin to live one of the most authentic experiences, you cannot miss a walk through the Kerala backwaters.

Cochin is located in Kerala, in southern India. It is an area known for its backwaters, some lakes where you can navigate and even spend a night on board in a house-boat (or houseboat).

It is a good option if you like nature, since you will be able to see the natural environment that surrounds the backwaters. The boats pass through the narrow canals, surrounded by rice fields and villages.

During the tour you will see the lifestyle of the locals who live in floating villages in the backwaters. From the boat you can also see the sunset, a photography image.

If you do not have time to spend a night in the Kerala backwaters, also keep in mind that there are half-day excursions, in which you can sail for a few hours through the backwaters.

3-Enjoy the beach of Fort Kochi

In the Fort Kochi there is an ideal beach area for walking, sunbathing or boating. From the beach, especially if you take a boat route, it is possible to see dolphins in their natural habitat.

From the Fort Kochi beach you can lie on the sand and see the famous Chinese fishing nets, one of the most characteristic images of the Cochin coastline.

4-Trekking in the Periyar National Park

If you are a person who is passionate about nature and sports, we recommend a day trekking excursion through the Periyar National Park. This park is located approximately 120 kilometers from Cochin.

During your time in the park you will be able to see its rich flora and fauna. Particularly noteworthy is the presence of tigers – the Periyar National Park is a tiger protection zone –, birds (there are approximately 255 different bird species) and reptiles.

In the center of the National Park is the Periyar Lake, with an area of 26 km2. There, with a bit of luck, you will be able to see some of the 40 species of fish that inhabit the area.

So, without a doubt, if you want to know what to do in Kochin and its surroundings to be able to fully immerse yourself in nature, keep the Periyar National Park in mind when preparing your route.

Now that you know what to see and do in Cochin in depth, take a look at our itineraries in South India!