Agra is a city in the state of Uttar Pradesh in the north region of India. The city is located on the banks of the Yamuna and has a population of more than 1.9 million. With some interruptions, Agra was the capital of the Mughal Empire from 1526 to 1648. At that time it was one of the most powerful and magnificent cities in the world. With the decline of the empire and the move of the capital to Delhi, Agra lost importance. Today, Agra is a highlight on any trip to India, as this is where the world-famous Taj Mahal is located. I was a little surprised by Agra as I would have expected a modern and clean city due to the masses of tourists. But the opposite was the case. Agra is dirty, doesn’t look very inviting and, like almost everywhere in India, has a serious smog problem. So it is enough to see the sights in the city and the surrounding area and then move on. You can spend 2 days at Agra and have enough time to explore the main attractions. Here are Agra’s top five attractions:

How to get to Agra?

India is a huge country and you can visit the Taj Mahal from hundreds of places, but the most common for it is New Delhi, the capital. This unique monument is located in the city of Agra.

Visit the Taj Mahal by train

Trains from New Delhi to Agra take approximately 4 “Indian hours” to arrive. By this we mean that on many occasions these trains stop for a long time halfway without apparent explanation and considerably lengthen the estimated time of arrival. Since April 2016 there is a “high speed” train that connects both cities in approximately 2 hours. It has Wi-Fi and air conditioning. It is known as the Gatiman Express and it will make visiting the Taj Mahal much more comfortable.Visit the Taj Mahal by bus or car

If you plan to visit the Taj Mahal from New Delhi by road, it will take approximately 4 hours. The roads in this section are in fairly good condition but the traffic can be somewhat chaotic. It is always advisable to leave the job of driving in India to an expert and avoid complications. 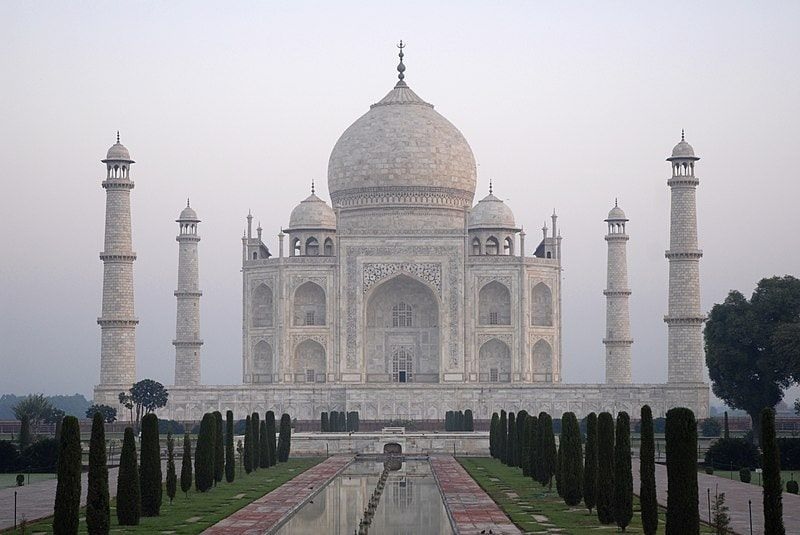 The Taj Mahal is a unique symbol of love. It was built by Emperor Shah Jahan in memory of his favorite wife Mumtaz Mahal who died giving birth to their 14th child. Construction began in 1631 and was completed in 1653. A total of 20,000 people worked on it. The Taj Mahal stands on a 100 x 100 meter marble slab. It is a 58 meter high and 56 meter wide structure surrounded by 18 hectares of gardens. A long pool of water is the center of this garden. Four minarets were built around the main building. The main building consists of 28 different precious and semi-precious stones set into the marble. In 1983 the Taj Mahal was declared a World Heritage Site by UNESCO and is one of the 7 modern wonders of the world. The Taj Mahal is open every day except Friday.

Tickets to visit the Taj Mahal

The vast majority of hotels and hostels in Agra are located around the Taj Mahal and, with luck, you can stay in one that offers views of the monument. Once you have settled in, you should know that there are three different doors to enter the Taj Mahal. The South and East entrances are the furthest from the monument. The West is the main one and the closest to the great white temple.

Many people dream of entering the Taj Mahal complex soon and being able to see the sunrise from there. You must bear in mind, if you want to enjoy this beautiful moment, that the different doors have different hours. Also, depending on the time of year you plan to visit the Taj Mahal, the sun may rise before the gates open. The west and east gates open at 06:30 am while the south does not open until 8:00 am.

Another fact that you are interested in knowing is that the ticket offices to buy the entrance to the Taj Mahal are located about 500 meters from the west gate. It is a common mistake to queue at the entrance and when your turn comes to have to leave there because you do not have your ticket to visit the Taj Mahal. Because of this, many people lose their opportunity to see the sunrise from within. Buy your ticket before going to the gate or take advantage of the recent option that allows you to buy the ticket to the Taj Mahal online.

Sunset at the Taj Mahal

Once you leave your visit to the Taj Mahal you can continue to visit other points of interest such as the bazaar or the Agra Fort. If you hire the services of a rickshaw (typical Indian “taxi”) to take you to these places, it will also include sunset views of the Taj Mahal. This walk takes you to the back of the large marble building and allows you to see from the other bank of the river how the sun falls to the right while you have the Taj Mahal right in front of you. A postcard image!

Visit the Taj Mahal at night

Another novelty, together with the high-speed train and the purchase of tickets online, is the possibility of visiting the Taj Mahal at night for 5 days a month. This occurs on full moon nights and the two days before and after. Having the opportunity to see this monument with its night lighting is a true gift for the eyes.

Useful information to visit the Taj Mahal and prohibitions

– The Taj Mahal closes on Fridays, so try not to make your trip to Agra coincide with this date.
– The entrance to the Taj Mahal includes a bottle of water and some plastic that you must put in your shoes to avoid damaging the floor. There is also the possibility of entering barefoot.
– Before entering they will thoroughly check your backpack and pockets. Try not to bring anything strange as they probably won’t let you through. Lighters, matches, chargers or headphones are prohibited.
-In case you want to take pictures with a tripod you will have to pay a special ticket whose price is much higher.
– It is totally forbidden to eat and smoke inside the complex.

– Inside the mausoleum building it is not allowed to take pictures.

The Red Fort OR Agra Fort in Agra is a vast fortress and palace complex where three generations of Mughal Emperors celebrated their power and glory. Construction began in 1565 under Emperor Akbar the Great. The complex is situated on a hill on the banks of the Yamuna River. The fortress has a crescent shape and is surrounded by a huge wall. The wall is an average of 20 meters high and about 2.4 kilometers long. Due to the use of red sandstone as a building material, the entire fort shimmers in a rusty red colour. Behind the defensive walls you will find numerous palaces and mosques. The gardens within the complex create a charming landscape in addition to the buildings. You will need at least two hours to explore the entire complex.

The Itimad-ud-Daula mausoleum was built between 1622 and 1628 by Nur Jahan, the chief wife of the Mughal emperor Jahangir, for her father Mirza Ghiyas Beg. The mausoleum of Itimad-ud-Daula has a number of unique architectural and decorative features: the entire surface of the building is made of white marble, the corner towers are built in the form of minarets, and in the interior, the base zone of the walls is decorated with geometric stone inlays.

The Small Taj is another palace to see in Agra that is quite cute and curious. It is located near the gardens of the moon (Mehtab Bagh) and, once you arrive, it seems as if you are seeing a small reproduction of the Taj Mahal, hence its name.

The small Taj was also intended as a mortuary temple and is worth a visit after visiting the Moon Gardens (Mehtab Bagh) to see one of the best views of Agra City. On one side of Fatehpur Sikri you will find what, for my taste, is one of the most beautiful mosques to see in Agra and India: Jama Masjid. Jama Masjid is located 10 minutes walk from the main entrance of Fatehpur Sikri and although there are many locals who try to scam you saying that it is far and that you pay them to take you, it will be worth it to walk a moment and see this monument.

Today, in this temple, is the mummified body of one of the most important prophets of Islam in the city of Agra.

Dayal Bagh is, without a doubt, favorite place to see in Agra because it is an exquisite representation of a Muslim temple made of white marble from Rajasthan. According to geologists, Rajasthan white marble is the best marble in the world due to its hardness, low porosity, and how beautiful it is after it is polished. They even consider it even more beautiful than the Carrara marble from northern Tuscany in Italy. About 40 kilometers west of Agra is the former capital of the Mughal Empire, Fatehpur Sikri. The city was founded by Akbar the Great, who built numerous palaces and mosques between 1569 and 1574. As quickly as the political center was built, the city was abandoned again in 1585. The reason for this was the lack of water supply. What remained was Fatehpur Sikri, an almost perfectly preserved Mughal city. One of the most impressive and well-known buildings in Fatehpur Sikri is the Panch Mahal. The five-story palace is northwest of the sleeping chambers. A total of 176 columns support the magnificent building. The palace was probably used by the court ladies in the past. You can visit Fatehpur Sikri on a day trip from Agra. You will need at least three hours to explore all the main attractions.