Jaisalmer is located in the Thar desert and is crowned by its famous fort. In 1156 a prophecy was fulfilled that predicted that a kingdom would be built on top of the Trikuta hill. In this article we discuss the best things to see in Jaisalmer. The city took its name from its founder, Rao Jaisal. In fact, Jaisalmer means “Jaisal Hill Fort”. In addition, it is nicknamed the “Golden City” because its buildings reflect that color due to the yellow sand that surrounds it. Jaisalmer’s inhabitants are overwhelmingly Rajputs of the Bhatti caste. These had to take refuge in the desert due to wars between tribes. In the years following the founding of the city and its fort, in the 12th century, the city suffered looting and the inhabitants fled. Although it was depopulated for a time, its importance did not cease due to its strategic location on the trade route that linked India with Egypt, Persia, Africa and other places in the west. Below we explain the

Best things to see in Jaisalmer:

Why is Jaisalmer called the golden city of Rajasthan?

The nickname of the golden city comes from two things:

What to see and do in Jaisalmer?

The city of Jaisalmer would not be the same without its famous fort that stands imposingly on Mount Trikuta. It was built by King Rawal Jaisal in the year 1156 and is a World Heritage Site. From the city you will be able to see its walls and towers that had the function of defending it from attacks and intruders.

Currently, the Jaisalmer Fort is still inhabited, so visiting it is very interesting. Inside you will find restaurants, shops, temples, palaces and houses. We recommend that you explore the alleys and walk aimlessly discovering all its corners.

You will see that in several of the houses that are inside the fort there is a mural on the outside. There is usually a representation of Ganesha, a god who has the body of a human and the head of an elephant. You will also see a swastika, which is a symbol of good luck.

One of the palaces that you can visit is the Maharaja’s Palace. It has seven floors and you can enter some of them. His fabrics, mirrored works and paintings are very interesting to see. 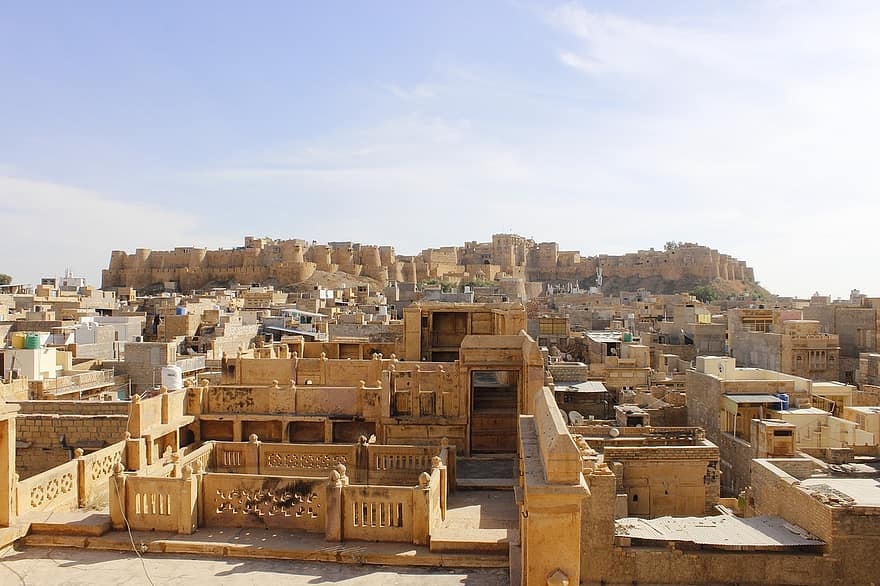 Price: The entrance to the fort is free. Every palace and temple has its price.*
Hours: open every day, all day.*
Location: Jaisalmer Fort

Gadisar Lake
Gadisar Lake was built in the 15th century, making it an artificial lake. It was created by King Jawal Gadi Singh with the aim of conserving water, being able to provide that resource to all the inhabitants.

Around the lake you will see some of the temples and shrines of the city. In addition, you can take a boat ride on it or sit on one of the ghats to enjoy the scenery.

From Gadisar Lake you can see some of the most beautiful sunsets to see in Jaisalmer. It also has wonderful views of the fort, which stand out during sunrise.

Havelis to see in Jaisalmer

The Havelis are mansions that were owned by families with high purchasing power.

One of the most important Havelis to see in Jaisalmer is the Patwon Ji Ki Haveli. It is located near the city fort and is actually made up of five distinct havelis. The first palace in the complex, Korthari’s Patwa, was built in 1805. The merchant who made it decided to build a haveli for each of his five sons. Currently it is used as the headquarters of the Government.

Another of the Havelis is the Salim Singh Ki Haveli. It was built by Salim Singh, the Prime Minister, in the year 1815. At that time the city was the capital of the kingdom. The architecture stands out, with the two upper floors being wider than the lower ones, and its height. It is made of stone and no cement was used.

The Nathmal Ji Ki Haveli was built a few years later, in 1885. It features a mix of Islamic and Rajput architectural styles. It was created by two architect brothers to be the residence of Prime Minister Diwan Mohata. The front features balconies, windows, and carvings of flowers, elephants, and birds. 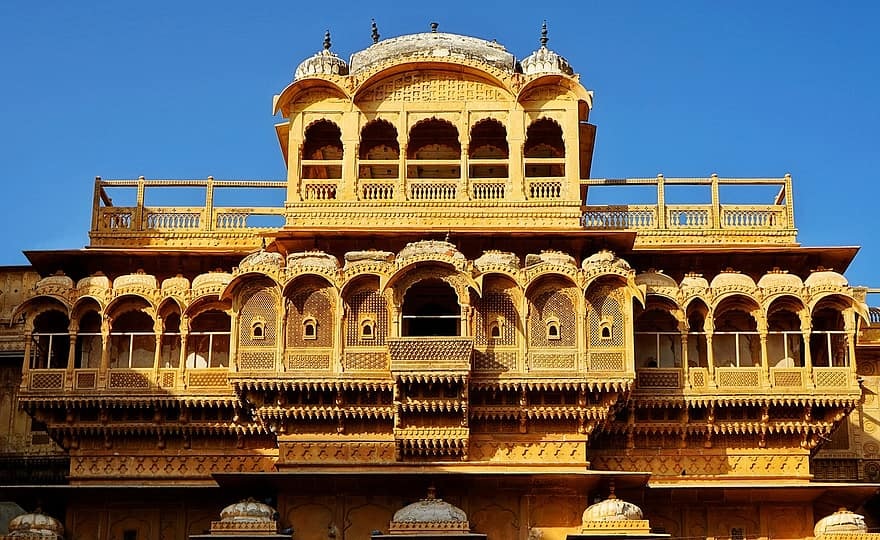 Thar Desert
The Thar Desert is one of the most populated in the world: 40% of the inhabitants of Rajasthan live in it.

This desert is arid, with sand dunes scattered across the terrain. It has protected areas with some animals such as foxes, antelopes and snakes.

Bada Bagh – What to see in Jaisalmer
This enclosure is a set of cenotaphs, which are tombs or monuments built in honor of a deceased person. Bada Bagh was built by the son of Maharaja Jai Singh II to commemorate his father. The first cenotaph was built in the 16th century.

Remember that cenotaphs are symbolic tombs. Due to their religion, the maharajas have to be cremated in order to pour their ashes into the Ganges river.

Bada Bagh means “Great Garden“. It receives that name because it is an area of vegetation in this part of the Thar desert. This is because, many years ago, one of the maharajas had a dam built to make irrigation easier.

Jain temples
Inside the fort there are 7 Jain temples that are a wonder to see in Jaisalmer.

Marble and sandstone are carved with brutal precision and artistry that will leave you speechless.

The entrance fee to the temples was 200 rupees per person and it is mandatory to enter barefoot.

In these temples there are more than 6666 statues of the God they worship (the number is strange, isn’t it?). 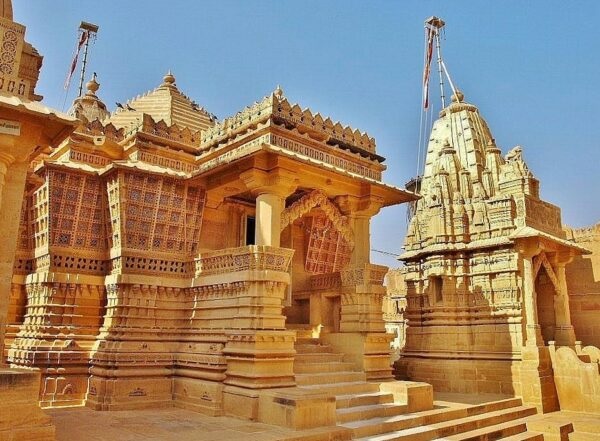 Excursion to the Thar Desert in Jaisalmer
A visit to Jaisalmer is not complete if you don’t get away to its desert.

In our case, we dedicate the afternoon to visit its surroundings, go on a camel excursion and get to know the haunted village.

Do you want to sleep in the Thar desert?

There are many camps around the desert where you can treat yourself.

The place is nice, although not very intimate, to tell you that there can be 150 people in the same camp.

The area is called Sam Sand Dunes and what it includes is your accommodation in a cabin or tent, dinner and folkloric dance at dusk.

The haunted village of Kuldhara

On our way to the Thar desert we pass this abandoned village.

There is no explanation why this village was abandoned in the 19th century, there are many theories such as lack of water supply or earthquakes, as well as many legends.

One of them tells that a 70-year-old minister of the state of Jaisalmer was taking a walk and saw the 16-year-old daughter of the village leader.

He fell in love with her and went to tell the father that he wanted to marry her daughter, and that if he did not accept he would come anyway with the priest and marry by force.

Since he was a very powerful man, the village leader feared for his life and that of his family, but he also recognized that it was not right to marry his daughter to such an old man.

So at night he gathered the whole village and they left the place.

Here you can see how the locals lived and their houses of the time.

Camel Safari to see sunset
The strong point of the excursion to the desert is to go on a camel to the well-known “sunset point“, where you can appreciate the sunset.

If you want to go further into the desert they will charge you something like 1500 rupees, we didn’t.

Even if you have already paid for the camel, the guys who drive you always expect a tip.

If you want to plan and book an excursion through the desert either by camel or by jeep you can do it here.

Conclusions and recommendations on Jaisalmer
Jaisalmer is a beautiful city but we did not enjoy it as much as we expected.

The desert, more than looking deserted, looked like a local market, where thousands of people crowded together to see the same sunset as us.

Going in winter has the advantage that you will not suffer the tremendous heat of June and July, the problem is that if you go on festive dates you will have to share it with thousands of people.

The best time to visit Jaisalmer is the end of January or February where the weather is still cold but you don’t have so many people around you.

Finally, if you want to do an excursion like ours in Jaisalmer, you can book it or see different tourist packages here.