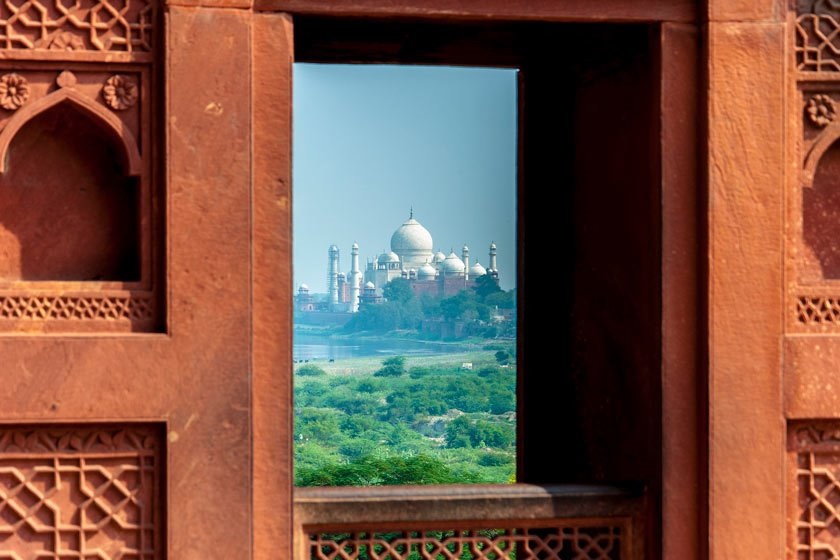 Agra about 225 kilometers south of Delhi, statistically the most visited city in India. If you imagine this immense country as an eternal flow of contrasts, Agra is the clearest example. At first glance, it is a tremendously bustling, oppressive city, and on many occasions, dirty and with almost no sense of order. However, its legendary attractions, including the imposing Taj-Mahal, make it unique and wonderful. Almost everything else is relegated to the white beauty of this wonder of humanity. However, it would not be entirely fair to visit Agra exclusively for the Taj-Mahal, since its history is crossed by other attractions. Added to all this is the fact that it is one of the most artistic cities in India, with popular crafts of enormous interest. Magic and mystery, mysticism, monuments that must be visited at least once in a lifetime, tradition, Agra is a dream destination for any self-respecting good tourist.

Built by the Mughal Emperor Sha-Jahan between 1632 and 1648, as you know, in honor of his favorite wife, Mumtaz Mahan, who died in childbirth, it is possibly one of the most beautiful mausoleums in the world. On Fridays you can enter the interior for free, although, if possible, it is best to go early to see the sunrise or stay until sunset. I’m sure you’ll get hundreds of photos…

You have to walk through its gardens, enjoy the interior beauty, like a palace from a fairy tale (not surprisingly its name means Palace of the Crown). Notice how the tone of the marble changes with the sunlight. The structure carries precious stones and verses from the Koran. The most recommended; enjoy and live it to every detail.

When you see him, his name is more than clear. Its red walls are very close to the Taj-Mahal, and were erected in the 16th century. It really is huge, since its walls are about two and a half kilometers long, housing a small succession of palaces, audience rooms, exotic rooms, patios, gardens and the magnificent Marble Mosque. It is a UNESCO World Heritage Site since 1983. 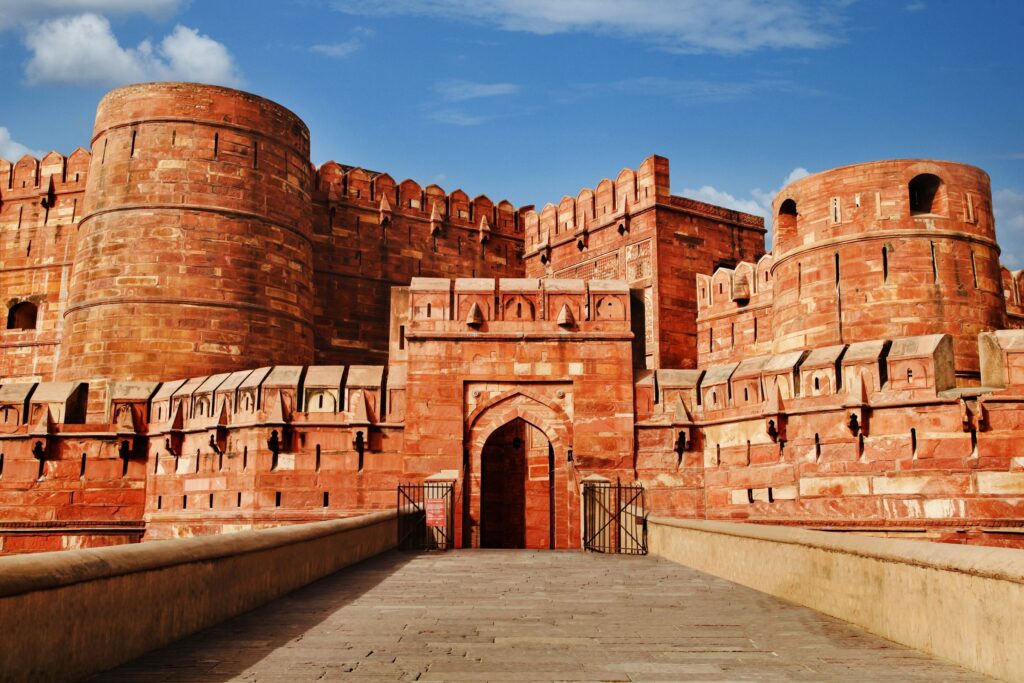 This pavilion, which is located inside the Red Fort, is the one that houses the royal rooms of the entire complex. It is not too big, although it is very beautiful. It is divided into a living room or Baithak and the Khwabgah, three suites that are the main bedrooms. Next to it we have the Burj Mussaman, or octagonal tower, and the Tasbih Khana, the place of the emperor’s private prayers.

Located opposite the Red Fort, it is one of the largest mosques in India. It was built in 1648 by Shah Jahan, to be dedicated to his favorite daughter, Jahanara Begum. It imposes its red sandstone, and its decoration in white and blue marble. Crowned by three stone domes, it is surrounded by the bazaar area, so it will be an easy place to pass through.

Situated on the other side of the Yamuna River, it was built in 1628 at the behest of Nur Jahan, who buried his father Mirza Ghiyas Beg, who bore the title of the mausoleum’s name, there. With its four thirteen-meter hexagonal towers at the ends, it is considered a forerunner of the Taj-Mahal, due to its shape, the whiteness of its marble and the elements used in its decoration. 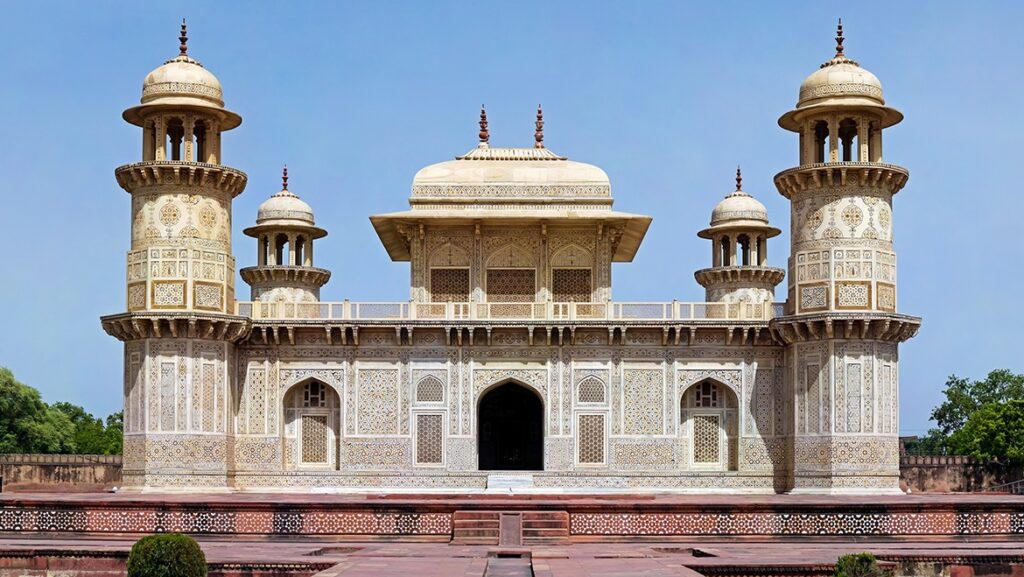 A visit to the city of Fatehpur Sikri, located 42 kilometers from Agra, is essential. Today it is a deserted city, but in its time it was the capital of the empire. Its impressive wall gives way to a whole museum of monuments, with the Panch Palace, the Palace of the Winds, the Salim Chisti Mausoleum, the Hiran Minar Tower or the Jodh Bai Palace. It takes at least a couple of hours to explore its entire network of Mughal architecture. Another wonderful excursion that we suggest is to take the Shatabdi Express train that, in two hours, takes you from Agra to Delhi (or vice versa). Much closer, four kilometers from Agra, is Akbar’s Mausoleum, made of sandstone and marble.

The abandoned city Fatehpur Sikri is a fortified city that stands on a cliff, about 35 km. of Agra and the Taj Mahal, located next to a currently dry lake, and in a place that could well be described as ghostly because of its neglected state and its dryness.

The story goes that around the year 1567, Emperor Akbar wanted to find a new location for his imperial court, and he chose the city of Sikri for it. To make sure of the correctness of his decision, he consulted a prophet who had divined the birth of his three children, so that when the last of them was born, he began to build the city.

The current name of Fatehpur, which means City of Victory, was given in 1573, after winning the Battle of Gujarat. However, this city had to be abandoned only 17 years after its end, because the architects did not take into account the severe droughts of the region and they could not find any way to obtain water for a city that had been built on certain hills.

The entrance to the city is impressive since it is through the Bulland Darwaza, a huge entrance arch 40 meters high which must be crossed after climbing up to 70 steps, in what must have been at the time a real demonstration of power. The impression one has once one crosses it is that of finding oneself in a sort of western city, but on the eastern edges, with houses and abandoned buildings, two stories at most, with their terraces, their gates, and all the streets of the city. earth or sand. 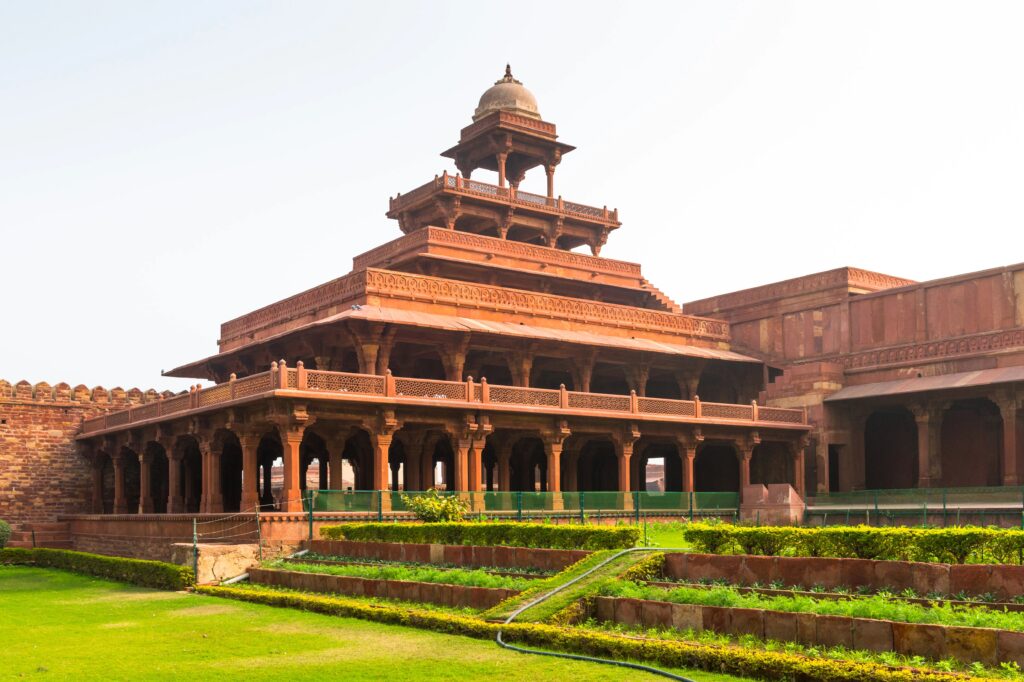 The Imperial Palace is several stories high and is made up of several pavilions linked together by interior courtyards. It is as if it were a whole city with different buildings. Of these, the ones that stand out the most from the rest are the Women’s Pavilion, the Panch Mahal, a building that has five floors in the shape of a stepped pyramid, where each floor is a little smaller than the one immediately before it, and the Hall of Audiences, a building that seems independent and that externally seems to have two floors and crowns each corner with a kind of small tower. However, once inside you will realize that there are not two floors, but one with a very high ceiling.

The Great Mosque is really beautiful, for that immaculate white of the marble standing out from the rest of the buildings, all dark brown. There is the saint who prophesied on his day the birth of Akbar’s 3 sons. Today, that mosque is a major Hindu pilgrimage center.

There, at the exit, and after once again enduring the harassment of the vendors, we board our “comfortable” bus and head to Agra.

Fatehpur Sikri stayed for me, as I suppose for all the travelers who travel through it, as one of those pleasant, unexpected surprises that appear in all our trips around the world. 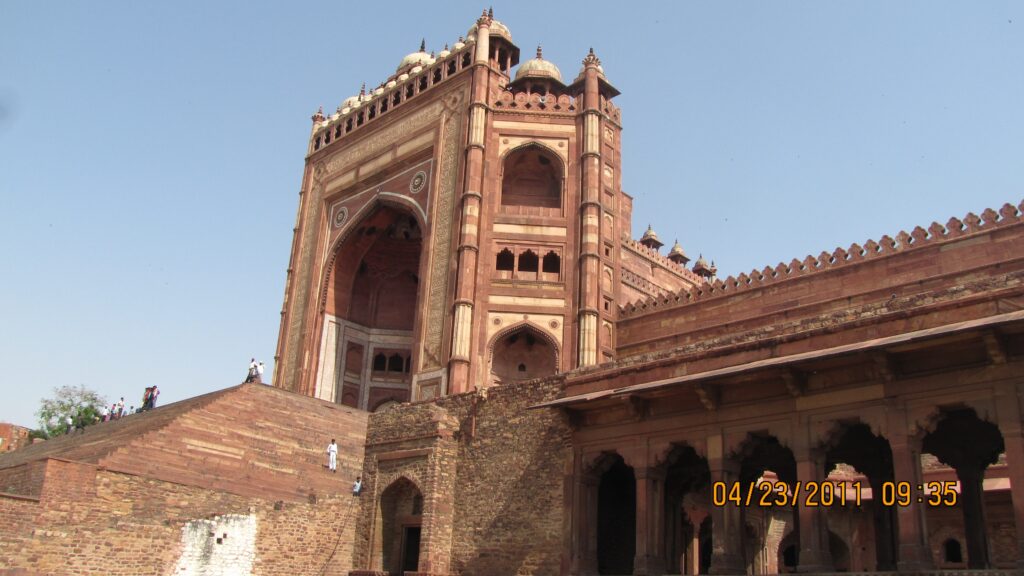 We had only one visit left in Agra: about 10 kms. On the outskirts of the city is the Sikandra temple, known as Akbar’s mausoleum. It is a beautiful temple, like most of the ones in India, but a piece of advice, if you visit it, do it before the Taj Mahal because it is so beautiful that all the rest is in the shade.

This is what happened to me with Sikandra. Very nice, yes, but I would have preferred that day not to see anything else and try to remember and establish what my eyes still had on their retinas.

However, this is a visit that you should not miss on your way through Agra. What surprised me the most in particular is that the large facilities it has, including its gardens, are literally infested with monkeys and deer that have no problem approaching visitors and asking for or stealing food.

The mausoleum began to be built in 1605 by Emperor Akbar, but it was his son, Jahangir, who finished it years later, in 1613. That is why the temple has a curious mix of styles, as it combines the red sandstone typical of the time of Akbar, with the white marble that began to be used with Jahangir and Sha Jahan.

The construction is divided into two buildings. In the southern part there is a large door that gives access to four large minarets in the form of towers, and false arched doors.

For its part, the mausoleum is the one that contains the tomb of Emperor Akbar and whose cenotaph is accessed through a long, narrow, dark and highly abandoned corridor.

In the same state, that is, poorly preserved, is the central room of the temple, without major decorations, where Akbar is supposed to be. 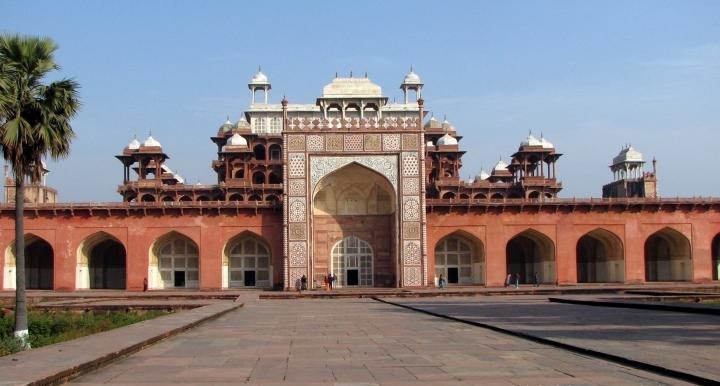 Agra is a city that offers a warm climate practically all year round, although between the months of June and October it usually rains frequently. Of tropical type, it is very hot in summer, even reaching 45 degrees. That is why it is more recommended to visit Agra in autumn and winter since, although it is cold, it is much more bearable.

You will see the typical souvenirs related to the Taj-Mahal everywhere in Agra. However, its bazaars and markets are full of handicrafts, made with brass, rosewood, stone encrusted with jewels, as well as carpets, vases, etc… The best places to buy are the Kinari Bazar and the Sadar Bazar. In India the official currency is the rupee (currently 1 euro equals 63 rupees).

To eat in Agra I recommend you go to the hotel restaurants since, curiously, it is not a city that has great restaurants. Typical gastronomy of the area would be the classic khebabs, pulao rice, naan bread, kheer dulce de leche and everything related to Mughlai cuisine. I that you, to prevent, did not pay much attention to the stalls. And the water, always bottled.

It may not have such a lively nightlife as other cities in India, but in Agra we will find discos, bars and pubs, with dance floors, DJ’s and so on. If yours is a bit quieter, there is nothing better than walking in the moonlight through the outer enclosure of the Taj-Mahal or seeing the light and sound show at the Agra Fort.

Agra is such a bustling and chaotic city in terms of traffic that taking a taxi is an adventure and a bus a waste of time. Unless the distances are very long, it is best to go on foot, rent a bicycle or take a taxi. If you want to make excursions in the surroundings, the best are the buses, the train or the taxis (arrange a price with them. In general, a three-hour trip costs about 300 rupees.

To do it very quickly, you can take a flight from Delhi that takes just thirty minutes to reach Agra. From the capital of India you can also take the Shatabdi Express train, which takes about two hours, or the bus, which covers both cities in five hours. If you rent a car, keep in mind that in India you drive like in England, plus the roads are a bit bad.

There are many hotels in Agra, but perhaps it is best to recommend a much larger radius of action, so that you have greater freedom of movement. Agra is located in the region of Uttar Pradesh, so it is interesting to find a hotel in the area to visit Agra and its surroundings. To make your reservation, you can follow the following link: Hotels in Agra. 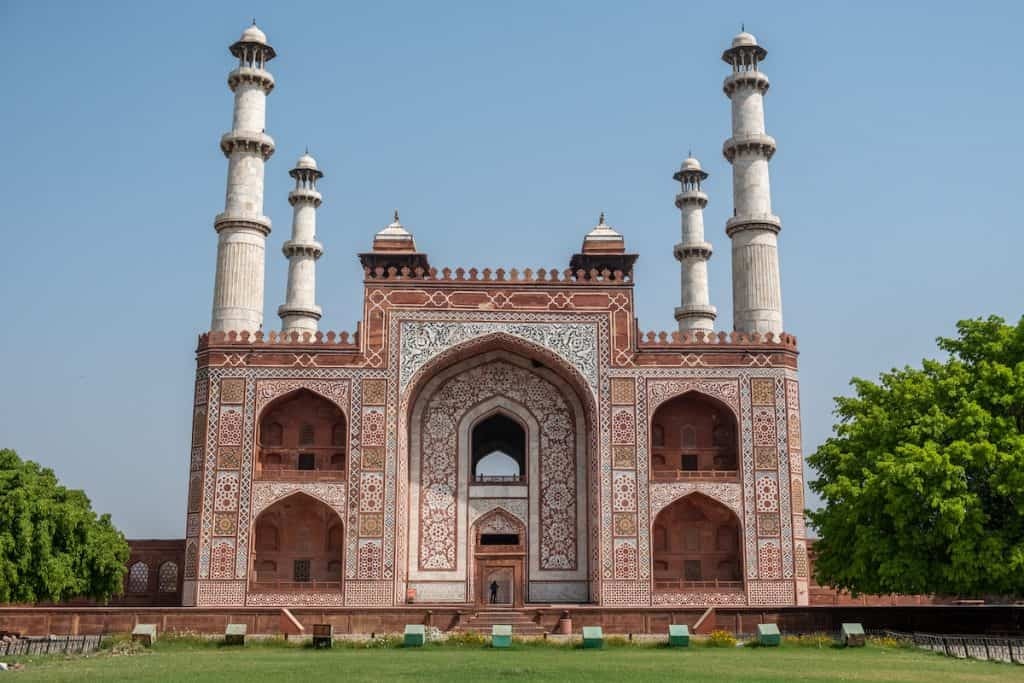