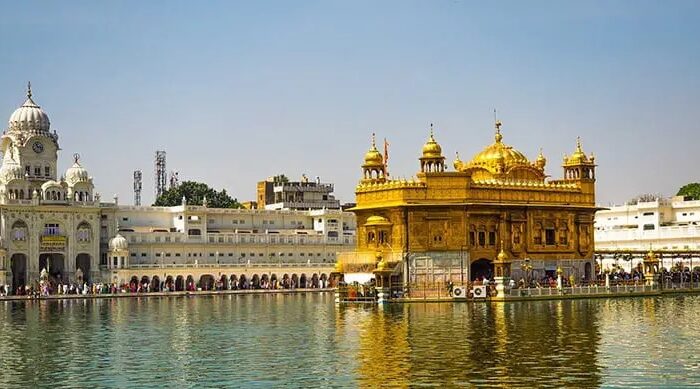 India is a great destination. It’s not for everyone, although many say a trip to India changes their lives. Is it true? As India is a spiritual country and many places here attract to pilgrimes to explore the temples, gurudwara, churches, mosques etc. But the holy shrine of Shikh “Golden Temple” is the principal site for each and every tourist who wants to explore the holy cities of India.

There are many historic buildings in the world, gilding is popular, but the Golden Temple of Harmandir Sahib is unique. Are you planning to go to India? Then this article is for you.

It is located in the city of Amritsar, in the north-west of the country, where a little more than a million people live. On the border of Pakistan, it is hardly 32 kilometers apart from Lahore, a city belonging to this other country.

For the Sikh religion the temple is the axis of pilgrims who wish to visit Golden Temple. Sikhism, It is worth remembering, it is one of the Indian religions founded between the fifteenth century and the sixteenth century by Guru Nanak Dev Ji. At that time the conflict between Islam and Hinduism prevailed and today, if we talk about the number of believers, Sikhism is in ninth place among the most popular religions.

Sikhs believe in one god and ten truths that are collected in a holy book, the Guru-granth. The five truths are, first remembering God is one who look after all the being and non being things. different though as compassion, truth, and always accepting God’s creation, among other things. There are 19 million faithful living in India and at the beginning of the 21st century a Sikh, Mamohn Singh, was elected Prime Minister of the country, the second non-Hindu politician to hold office. Nothing bad.

The temples in this religion are called gurdwaras and it is the most visited today: Golden Temple of Amritsar city.

Well, everything goes back to the year 1577 when Guru Ram Das dug a moat in this place, eventually the artificial lake that surrounds it today and gets the name of Amritsar, like the city, which means «pool of nectar ».

The temple was built between 1588 and 1604, all in the lifetime of the same guru. After completing the construction work in the main altar the writing hymns are placed here by Guru. There are about six thousand hymns in this book and it is opened and closed every day, ritually. Various gurus composed these hymns in 1604 until in 1704 Guru Gobind Singh added more hymns and established thereafter that no more gurus would be accepted after his death and that the holy book would become 10 gurus.

The Golden Temple represents the Sikh way of thinking so it has four entrances, one on each side, which shows the openness of this religion to others. Anyone can still enter today. Sikh religion is respert all other religion as Jewish, Muslim, Buddhist & Christian etc. And it doesn’t matter if you are black or white, male or female. All you have to do is behave simply and respectfully. Whenever you visit Gurudwara alway cover your head,sit on the floor, don’t smoke and drink & visit barefoot etc.

The building is maintained by the Sikhs themselves, some volunteers, and part of the money comes from donations given by Sikhs around the world. These laboring hands polish the marble and copper and gold with which the temple was worshiped in the 20th century, when it was completely restored after several decades of neglect.

Well its a mix of styles, Indian, Islamic, Hindu… The sacred hall is 12,25 meters by 12,25 meters, it is square, and it has two floors with a golden dome. Next is its 19,7 by 19,7 meter marble floor and its 5 meter deep indoor pond surrounded by a 1,3 meter wide marble passage which is traveled in a clockwise direction.

This room is connected to the terrace by a path or walkway. If you want to enter the pond you can, Sikhs consider that water has powers that help and repair karma and you will see people carrying plastic bottles with that water. Distillation and drainage are often done by the same volunteers who do the entire temple.

The room has two floors in turn, the sacred writing is on the first floor about 20 times a day. Four hours are taken from there and he is taken to another room, amid elaborate ceremonies. A gallery connected by a staircase is on the upper floor. Gold and copper shine everywhere and there are natural reasons too. The ceiling is decorated with gems and the floral designs that surround everything are arabesques as are the marble panels around the room.

There is another building, located in front of the walk and the sacred hall, which is the headquarters of the political branch of the Sikhs in the state of Punjab. It means akal takht, Throne of the Timeless God. You will also see a clock tower which of course was not there before. The British built a building after the war with the Sikhs and built the Gothic style bell out of red bricks. It was demolished twenty seven years later and today there is something more harmonious with the temple.

You will also see some trees that have been well cared for, since the Golden Temple complex was originally open and trees around the pond. There is one near the clock and it is believed that the builder of the temple sat here to watch the progress of the works. There are two other trees that have been vigorously preserved.

If you want to know more about Sikhism I suggest you visit the Museum that is established in the north entrance of the Golden Temple. There are pictures of martyrs and gurus, stories of how they were persecuted through history, historical artifacts and more. A new underground sector was also annexed, near the bell but outside the temple courtyard.

If you plan to travel to India and want to know about the Golden Temple you will be able to witness different daily rituals with free food 24 hours a day.