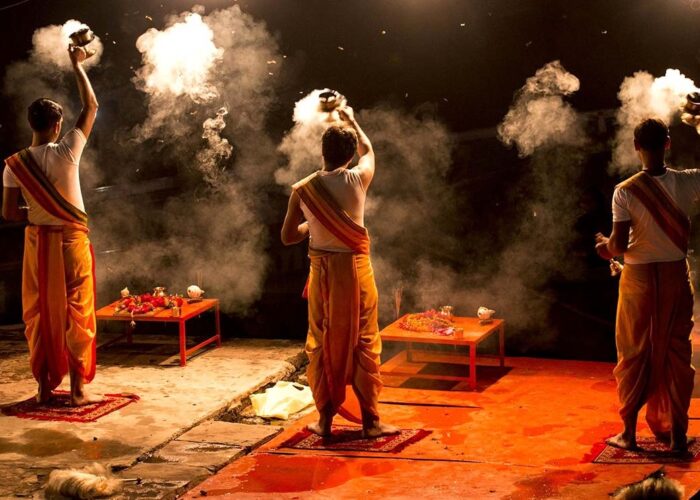 Would you like to know the most emblematic places in India without missing a thing? From north to south, in this article we will discover what to see in India and what to do to live the best experiences.

India is a country of contrasts, which will not leave you indifferent. In the north you will find some of the most recognized cities, such as Delhi –the capital–, Agra, Benares, Jaipur, Madurai, & Jodhpur. Majestic Mumbai awaits in the center, and in the south, the beaches of Goa for the most relaxing part of the trip.

In this article we discover the essential things to see in India. This way you will get more out of your trip!

What to see in India: North India

If you are wondering what to see in India, you should know that in the north you will find great palaces, sacred lakes, mountains and ancient temples. Next we take you on a tour of the main points of North India.

Delhi, the capital of India

Delhi is the capital of India. It has more than 20 million inhabitants and is a frenetic city. In it you can see some of the most outstanding buildings in the country.

What to see in Delhi?

What to do in Delhi?

Rickshaws are vehicles that work like taxis, where 2-3 people can fit. You can tour the entire city riding a rickshaw. In Thailand they are called tuk-tuk.

It is one of the oldest markets in the city. It is divided into sections and each of them sells a specific type of product (electronics, clothing, jewelry, food, etc.). It is a very authentic market where you can learn about the daily life of the inhabitants of Delhi.

If you are wondering what to do in India to take the pulse of the city and get to know local life, we recommend a visit to the Chandni Chowk market.

Jaipur is the capital of the state of Rajasthan. It is also known as the Pink City due to the color of many of the city’s buildings, which were painted like this in ancient times for the visit of the Prince of Wales.

What to see in Jaipur?

What to do in Jaipur?

Stroll through the bazaars

Chaura Rasta and Badi Chopar streets are two streets full of bazaars. There you can buy everything: sarees, slippers, perfumes, jewelry or fabrics at an affordable price.

In Jaipur is the Raj Mandir cinema, a place full of lamps and colors. There you can see Bollywood shows.

Elephants are animals worshiped by the people of Rajasthan. On the back of an elephant you can discover the corners of Jaipur as well as climb the Amber Fort.

Agra is one of the most visited places in India, as it is home to one of the most famous monuments in the world – the Taj Mahal, considered one of the seven wonders of the world. Agra is a city founded in the 16th century by the Mongol Empire. The city is located close (260 km) to another interesting city – Orchha.

What to see in Agra?

What to do in Agra?

Watch the sunrise or sunset at the Taj Mahal

Enjoy the theater show about the history of the Taj Mahal

At the Kalakriti Cultural & Convention Center you can enjoy a play on the history of the Taj Mahal in true Bollywood style. A good opportunity to learn more about the past of this iconic monument.

The Kinari Bazaar is one of the most emblematic markets of the city, near the Jama Masjid mosque. There you can buy clothes, shoes, spices or jewelry and discover the aromatic and colorful atmosphere of the country.

Horse Ride to the Taj Mahal

Another of the things to do in India is to take a walk in Tonga, it is a different activity that you can experience in Agra. The tonga are horse-drawn carriages that will take you to see every corner of the city, such as the Taj Mahal.

Jodhpur, also known as the Blue City or the City of the Sun, is the second largest city in the state of Rajasthan, founded in 1459.

What to see in Jodhpur?

What to do in Jodhpur?

It is the largest and most popular market in the city, near the Clock Tower. There you can buy all kinds of products at a good price.

Take a walk through the Mandore Gardens

The gardens are about nine kilometers from the center. They are a good place to relax and discover monuments such as the Mandore fort.

Near by Jodhpur there are saveral Bishnoi village where you can explore daily activities and weaving work.

Varanasi is a very authentic city and for sure it will not leave you indifferent. We recommend including it in your list of things to see and do in India! It is a city bathed by the Ganges River and is full of sacred temples and ghats. In Benares you will be able to witness religious ceremonies very different from those we are used to, such as funeral pyres.

What to see in Varanasi?

The Ganges River: The Ganges River is the most famous icon of Varanasi; it is the sacred river for the inhabitants of the city. Multiple functions are performed in the river: washing clothes, bathing, depositing corpses or animals. It is for this reason that it is a highly polluted river that you can travel by boat but in which it is highly inadvisable to bathe.

The Ghats: The ghats are steps that lead to the Ganges river. There the locals wash their clothes, pray, practice yoga or carry out funeral pyres. In India, unlike in the West, these types of funeral activities are carried out in public.

What to do in Varanasi?

An impressive Hindu ceremony of music, dance and fire is held at the Dasashwamedh ghat every day starting at 7:00 p.m. We recommend you attend this ceremony if you want to discover the most authentic India and something very different to do in India.

Sarnath is where Buddha first preached Buddhism and is a pilgrimage site today. The city of Sarnath has some gardens with the immense stupa of Dhamek.

On the same ghats you can see people meditating and you can also go to yoga classes at different places in the city. If you want to disconnect from the bustle of the city it is a good alternative.

Khajuraho is a city known for its UNESCO World Heritage Hindu and Jain temples. It is a small city that is part of the Madhya Pradesh region. It has around 40,000 inhabitants.

What to see in Khajuraho?

What to do in Khajuraho?

The museum will give you the overview of the temples and all their history, architecture and culture.

You can practice yoga and learn this discipline so common in this city. Khajuraho is a good place to disconnect from the bustle of the big cities.

In the months of February and March, the most important cultural event in the Khajuraho area takes place. It is a dance festival, which serves to promote the traditions of the area.

You can contribute your grain of sand at the Vidyamandir school where you can help and advise on changes and improvements for the future of the children.

Udaipur, the city of lakes

Udaipur is the city known as the City of Lakes. It has a natural beauty and a culture that will captivate you.

What to see in Udaipur?

What to do in Udaipur?

Navigating next to the Palace of Udaipur is one of the pleasures that you can experience in this city. The Palace has now been converted into a luxurious hotel. When you get to him you can have a drink at his restaurant.

The Bagore Ki Haveli is a palace where typical Rajasthani dances are performed. It is a very authentic experience to get to know the native dances.

Stroll through the Gulab Bagh

The Gulab Bagh is the largest garden in Rajasthan. The inhabitants of Udaipur come here to relax and unwind. If you feel like getting away from the bustle of the big cities of India, in this garden you will find peace and tranquility. In Udaipur there are several gardens that are worth visiting.

Ranakpur, the city of Jain temples

Ranakpur is a town located between Udaipur and Jodhpur. It is a city known for its temples. If you are wondering what to do in India and, more specifically, in Ranakpur, we will give you all the details below.

What to see in Ranakpur?

What to do in Ranakpur?

Strolling through the Ranakpur valley or the Kumbhalgrah wildlife sanctuary by jeep or horse is a perfect activity to see the place from a different perspective.

Pushkar, one of the oldest cities in Rajasthan

Pushkar is a holy and pilgrimage city. It is a quiet city and one of the oldest in Rajasthan. Known for its large lake, its 52 ghats and its Brahma temple.

What to see in Pushkar?

Lord Brahma’s Temple: Pushkar is one of the few cities with a temple dedicated to Brahma. You cannot enter the temple with shoes or with a camera. It is a temple that was built during the 14th century in marble and stone.

Savitri Temple: It is a temple dedicated to Goddess Savitri who is the first wife of Brahma. It is situated on top of a hill with stunning views.

What to do in Pushkar?

If you are thinking of doing some shopping, a good option is to go to the Pushkar bazaars. There is a craft market where you can find bargains. And you can visit surrounding villages.

Pushkar Cattle Fair
This one of the largest cattle fair in India, it held on Nov (Kartik mas of Hindu). All over the people from Rajasthan come and sale & buy the camel and another animals.

Mandawa, The City of Havelies

Mandawa is a city in Rajasthan located 190 km from Jaipur. It is known for its Fort and its havelis, called open art gallery.

What to see in Mandawa?

What to do in Mandawa?

Bikaner, a city in the Thar desert

Bikaner is a city located in the Thar desert. It is known for its Rajput architecture and red sandstone buildings.

What to see in Bikaner?

What to do in Bikaner?

You will be able to visit and see a wide variety of camels that are in India. At the entrance there is a small museum full of figurines made from the bones of camels.

Jaisalmer, the golden city of India

Jaisalmer is also known as the Golden City. It is a city in the state of Rajasthan in which its fort stands out. It is located in the west of the state, just touching the border with Pakistan.

What to see in Jaisalmer?

The Fort was declared a World Heritage Site in 2013 and is the most important attraction in Jaisalmer. It is on top of the Trikuta hill, 80 meters high. Inside the fort you can see the Palace of the Maharajah and, with the ticket, an audio guide in Spanish is included to learn more about the history of the Fort.

What to do in Jaisalmer?

A camel trek to the Thar desert

There are two options to discover the Thar desert: a day trip or an overnight trip in the desert. On these excursions, apart from seeing the Thar desert, you will also be able to see the cenotaphs of Bada Bagh (a large garden in the desert), the Lodruva temple or the Sam or Khuri dunes.