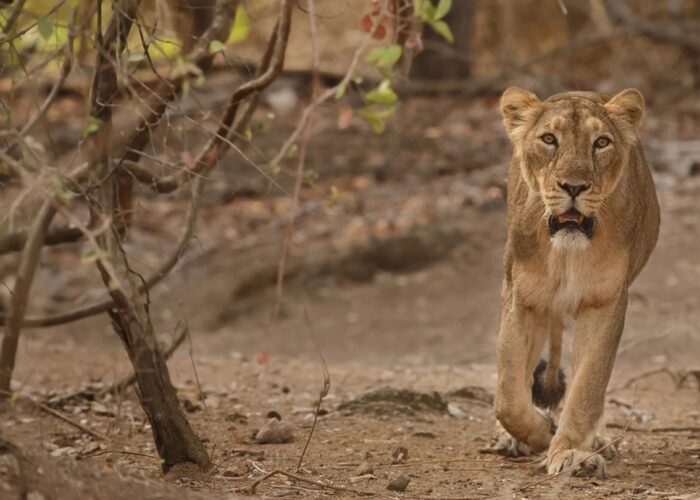 Have you ever heard of India’s top big five animals ? These are the most visited and consequently the most protected animals in Indian wildlife. 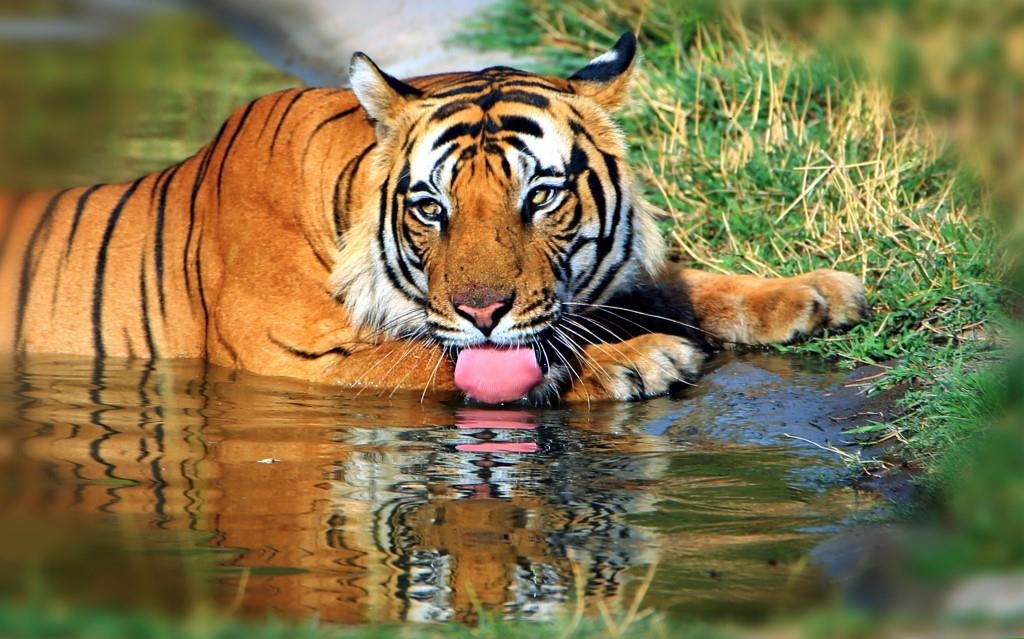 “The greatness of a nation and its moral progress can be judged by the way its animals are treated.”
Mahatma Gandhi

They consist of the Bengal tiger, the Asiatic lion, the Indian leopard, the great unicorn rhino and the Indian elephant.

India is known for its tigers, but there’s a whole world of exotic wildlife that you’ll see on interactive and engaging tours of the country. We have found Indian wildlife safaris that will convince you that a trip to India’s Big 5 is the vacation you never knew your soul needed.

India offers a myriad of world-renowned travel destinations that attract millions of tourists every year. The culturally dynamic background of tourism attracts the attention of historians and travelers alike.

Wildlife, including India’s Big Five, can be experienced beyond the urban intensity, where natural landscapes leave eyes sore in fabled jungles and an extensive and immersive biodiversity.

From Bandhavgarh National Park, home to the largest percentage of Bengal tigers, to the Brahmaputra Basin, a trans boundary river that lines the China-Bangladesh-India border.

Ecotourism is essential to the continued conservation of many native species, including India’s Big 5 and in particular the Bengal tiger population, which is now resurgent after a century of decline.

There are an impressive 166 national parks in India, 99 of which are game reserves. In addition, there are 515 wildlife/animal sanctuaries across the country, many of which are managed by or collaborate with the Tiger Project.

Where to see the Big 5 of India

Above are the northern states of India, home to many of the National Reserved Parks that host encounters with India’s Big 5. wildlife animals in India

We’ve found some of the most exciting locations where you’re guaranteed to encounter one of India’s ‘Big Five’. All tours have been carefully selected, always keeping in mind the values of ecotourism and the ethical treatment of animals. 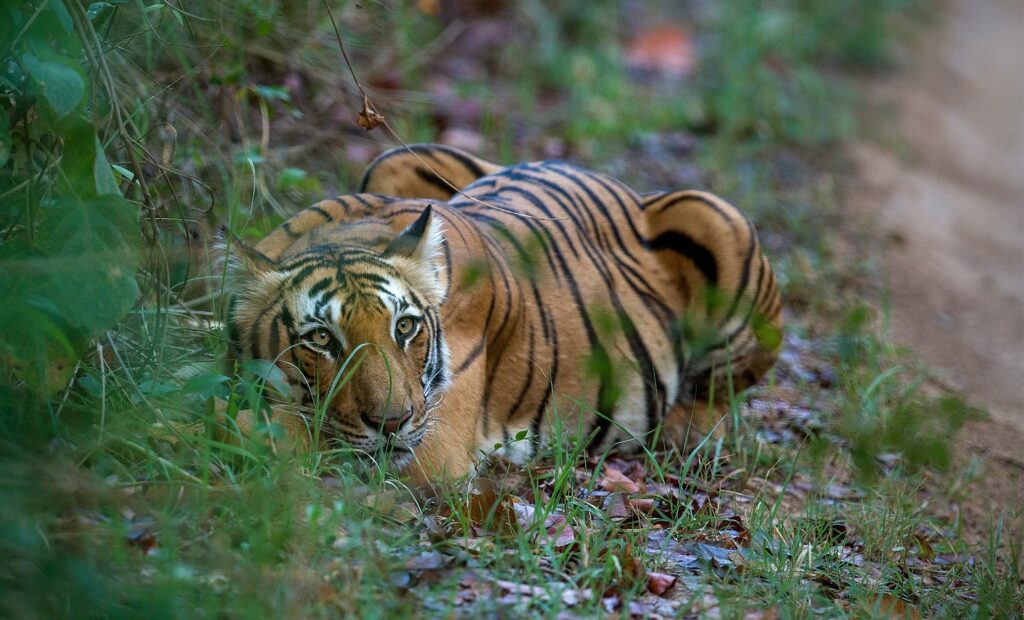 More than an animal of undeniable strength, agility, and power, the Bengal tiger holds ingrained generational significance in Indian culture.

Appreciated as a symbolic icon of natural heritage. One of the largest land mammals in the world, the tiger has always fascinated and amazed those lucky enough to encounter their species in the wild. The body length can vary from 2.5 to almost 3 meters.

Tigers are generally solitary but can span territories of up to 7 females. Their diet is carnivorous; known to hunt prey such as deer and even other predators.

As India has the largest population of the sacred tiger, they are a top priority for the World Wildlife Fund (WWF) India. In addition, Project Tiger was launched in 1973 as a very important conservation program.

She has overseen the formation of more than 25 tiger monitoring and conservation reserves and is responsible for increasing the tiger population by nearly three times the original population.

Endangered: Poaching is the biggest threat to the tiger population. More than 3,000 wild tigers are expected to be counted in 2018 – a number that has doubled since 2006.

WWF-India’s tiger conservation work aims to conserve and restore tiger habitats and critical corridors while protecting the tiger and its prey base in the tiger landscapes within India, eventually leading to an increase and stabilization of tiger populations across the country leads.

What you can do?

Here are some practical steps you can take to save the tiger:

Raise awareness where possible in active/existing tiger discussion forums and share or compare resources to most efficiently assist in conservation efforts to protect the tiger and enforce strict regulations on tourist tiger encounters.

This leads to the next point: being a responsible tourist – leaving nothing but footprints. The tiger’s wilderness habitat should not be disturbed or polluted.

Pushing for change politically is also an impact stand. Selecting politicians who can represent positive environmental change, or writing emergency letters to ministers/executive decision makers who could directly make a difference.

Refuse/condemn the sale and use of animal products that have been poached or trafficked and if you are aware of this, contact TRAFFIC, an international organization working to end the wildlife trade and poaching.

Relieving Pressure on Natural Resources: We recognize the impact our lifestyle can have on the natural resources around us and will help protect India’s Big 5. Donate to WWF India and the Tiger Project.

Why is this important?

This is vital as Indian wilderness ecosystems depend on the existence of the tiger, without which the food chains would collapse and the ecosystem’s natural order would be irreparably disrupted. The extinction of an apex/predator is an indication of a fragile ecosystem that may not continue to exist.

The Asiatic lion can be recognized as being smaller than the African lion, weighing up to 190 kg and measuring almost 3 meters in length.

The coat color is between different tones. Male lion’s manes do not cover their ears, which are always visible. The Asiatic lion is found in a limited area of Gir National Park and the Indian state of Gujarat. Previously, the Asiatic lion historically inhabited much of western Asia and even the Middle East until migrating to northern India.

Once known as the Indian lion and even the Persian lion based on historical location. Although the lion has an endangered conservation status, the population is steadily increasing as of 2010.

The Gir Forest was declared a Asiatic Lion Sanctuary from 1965, after which the surrounding area was declared a wildlife sanctuary and was inaccessible to human activities or urban encroachment and development. 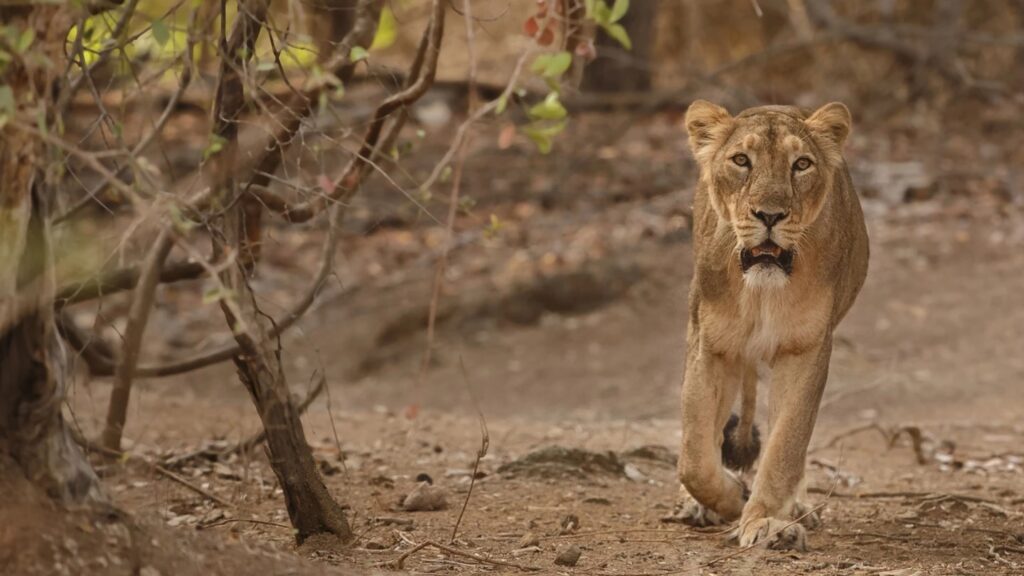 Nature Conservation Issues
Poaching and habitat fragmentation are among the greatest challenges and threats faced by the Asiatic lion. In addition, important roads through the designated Gir Conservation Area lead to temples, which attract large numbers of pilgrims.

This human presence has a major impact on the natural environment and migration of lions. Also instructive threats include lions falling into unguarded well systems and the unfortunate effects of genetic inbreeding due to single populations dominating an area.

WWF India conducted a study to assess habitat change over a 20-year period and, based on the results, made appropriate conservation adjustments to support the regrowth of the lion population as efficiently as possible.

The leopard is an animal that looks very different depending on its location in the world.

Name: Panthera pardus fusca
Family: Felidae
Total population: 14,000
Region: Indian Subcontinent
Conservation status: Vulnerable With an average weight of up to 90 kg and a length of 2.5 meters, their stealth and endurance is unquestionable. In exceptional cases, however, leopards can outgrow this.

Their coloration is relatively consistent with yellow upper body and white underbelly fur decorated with dark spots over much of the body, but it is the pattern of spots that differentiates leopards worldwide and even holds meaning behind their names and traits. The well-known International Union for Conservation of Nature (IUCN) officially classified the Indian leopard as vulnerable due to the rapid decline in population numbers.

However, this is directly related to the location of the leopard. The estimated number of 9800 Indian leopards is on the rise, while a stark comparison has been drawn for Sri Lankan and Persian leopards, where many subspecies have also fallen to critical levels of conservation concern.

The Indian rhino has a single horn that is present in both sexes. It is the largest of all Asian rhinos and the fourth largest land mammal on earth.

The Indian rhino is considered the most amphibious of all rhino species and is an excellent swimmer. It can run at speeds of up to 55 km/h for short periods of time.

Breeding takes place in all seasons. The gestation period is around 16 months and the young are around 105 cm long at birth and weigh up to 60 kg.

The most common habitat of an Indian rhino is along alluvial flood plains and in areas of tall grassland in the foothills of the Himalayas.

Previously widespread in the Ganges plains, the species is now restricted to small habitats in Indo-Nepalese terrain and northern West Bengal and Assam.

IRV 2020 Program: WWF-India has been committed to rhino conservation for over four decades. As part of this work, WWF-India initiated the Indian Rhino Vision 2020 (IRV 2020) in 2005 in partnership with the Assam Ministry of Forestry and other organizations.

The vision of the program is to increase the total rhino population in Assam to approximately 3,000 rhinos by 2020 and also clearly ensure that these rhinos are distributed across at least seven protected areas to ensure the long-term viability of an Assam population of the species.

In India, the Asian elephant was once widespread throughout the country, including in states like Punjab and Gujarat. 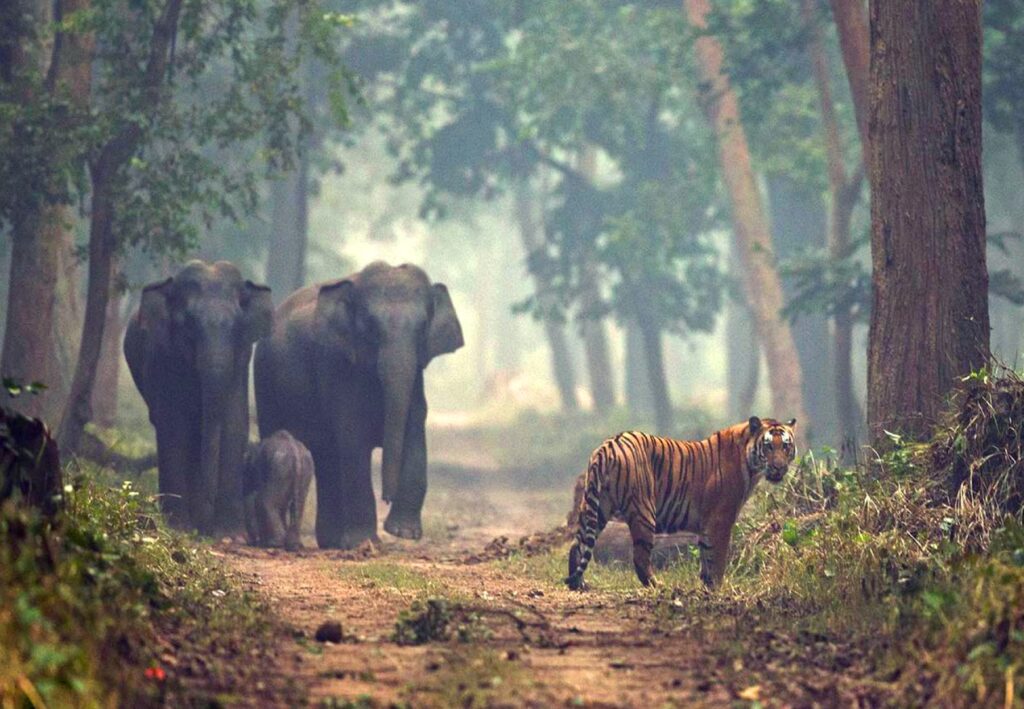 Presently they are found in four fragmented populations in southern, northern, central and northeastern India. Extreme habitat generalists, their habitat ranges from humid tropical evergreen forests to semi-arid thorn and scrub forests. However, the highest densities of the elephant population are found in tropical deciduous forests.

Elephants are “mega-herbivores” that need vast tracts of forest rich in food and water to survive.

Historically, through their long association with captive elephants dating back 4,000-5,000 years, Native Americans have developed strong cultural and religious ties to these gentle giants, a motive for increased conservation efforts and stricter tourism protocols that are both respectable and ethical in practice are.

Because of the diverse habitats that elephants inhabit, they help protect biodiversity in their range. Even their large food requirements allow elephants to exert a significant impact on trees and other vegetation, resulting in habitat modification. Therefore, their conservation could also help maintain the biodiversity and ecological integrity of large forest areas.

The Indian elephant has played an important role in Indian legend due to its prominent role in religion and religious festivals.

In Hindi, the elephant is the living reincarnation of the god Ganesha, the god of beginnings. Elephants are therefore revered and honored where in many of the religious divisions they symbolize wealth and fertility and hence are often depicted in paintings and portraits in people’s homes and play a very important role in the cultural and spiritual status of India.

In Hindi, the elephant is the living reincarnation of the god Ganesha, the god of beginnings. Elephants are therefore revered and honored where in many of the religious divisions they symbolize wealth and fertility and hence are often depicted in paintings and portraits in people’s homes and play a very important role in the cultural and spiritual status of India.